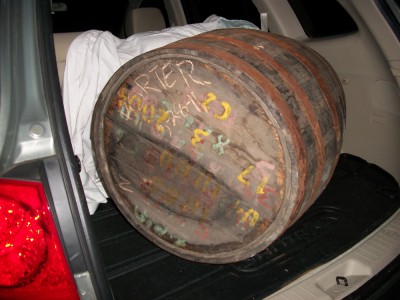 I have to say that I have a pretty amazing girlfriend. Last week, she told me that she had a surprise for me. She ended up taking me to Cigar City Brewing. That alone would’ve been enough to make me happy, but when walked in, I found out what the real surprise was.

She had bought me a whiskey barrel that Cigar City had used to age beer. This particular barrel was used to brew a version of their milk porter. They sell the barrels afterwards because after aging the beer, most of the whiskey flavor is drained out.

They suggest that a home brewer could use them to age their own brews. However, I will probably transform the barrel into a table (my apartment is starting to look a lot like a brewery) or a kegorator.