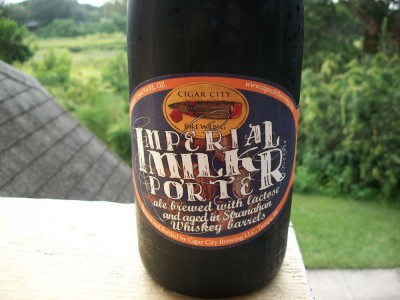 Last weekend, I stopped at one of my favorite spots in Tampa, the Cigar City Brewing tasting room. There were a lot of beers there that caught my eye, but the one that we brought home was the Imperial Milk Porter – Stranahan Whiskey Barrel Aged.

I don’t have a lot of information about Cigar City’s Imperial Milk Porter – Stranahan Whiskey Barrel Aged other than what was on the label and that it was a damn good beer.

I was a little bit nervous about this beer. I love milk porters. I love big, heavy strong beers. However, the whole part about being aged in Whiskey Barrels scared me. I like a lot of high alcohol content beers, but there’s a point where they taste too much like a bad shot of liquor.

The first sniff scared me. All I could smell was a whiskey aroma at first. Then some of the creamy porter aroma came out.

The taste was mostly like a creamy porter and there were only hints of whiskey. Okay, maybe more than just a hint. It does taste like a good porter mixed with shots of whiskey, except this whiskey doesn’t burn going down.

This beer probably isn’t for everyone. If you like lighter, summer beers or beers without much alcohol, avoid this one at all costs. However, everyone else needs to grab a bottle if you can find one in your area. Overall, it earned a very respectable 4.0 grade point average on the Passion For The Pint scale.