Poll: Do You Use A Secondary?

Do you use a secondary when you’re homebrewing? Or are you totally against using one? 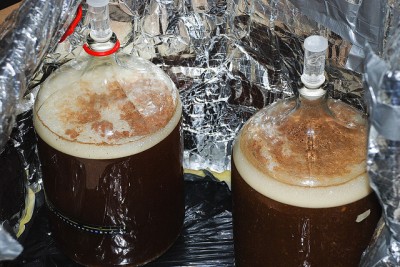 For a long time, the standard operating procedure was to transfer the beer to a secondary fermenter like a plastic bucket or carboy after the initial fermentation dies down in the primary. It’s a theory that’s published in many of the original and most common homebrewing books. However, it’s a theory that some are saying is now out of date.

I’ll admit that I’m torn on the subject. I’ve used a secondary fermenter since my second batch of beer that I brewed. It’s almost like second nature now, but I can understand the arguments against using a secondary.

To me, using a secondary make sense. It prevents the off flavors that are created when the beer sits on the sediment (in-active yeast, gluten from the barley, malt and other grains) too long. I don’t want my beer absorbing those flavors, nor do I want that sediment making it’s way to the beer in my bottles. I’d rather leave it behind when I’m transferring my beer from the primary to secondary. Plus, using a secondary does seem to lead a glass full of clearer looking beer.

However, I can understand how using a secondary could be just a waste of time or even do harm to my precious beer. The books were originally written a long time ago, the ingredients have improved since then and experiments have proven that letting the beer sit on the secondary for extended periods of time doesn’t lead to off flavors and bad tastes. And wouldn’t “cold crashing” the wort with a wort chiller be more effective to clearing the beer? Quickly chilling the beer would cause the proteins and other tiny sized particles to drop out of the wort before they even made it to the primary.

My Current Thoughts On The Secondary

And I reserve the right to change my thinking at anytime!

Currently I use a secondary in just two situations. The first situation is when I’m brewing a beer with a high ABV (alcohol by volume) and it needs to ferment for over a month. The second situation is if I’m dry-hopping or adding ingredients after the fermentation has slowed down.

What’s your thoughts on using a secondary? Do You use one?

Stay up to date with Passion For The Pint via Facebook, Twitter or subscribing to the newsletter (and free homebrew ecourse).