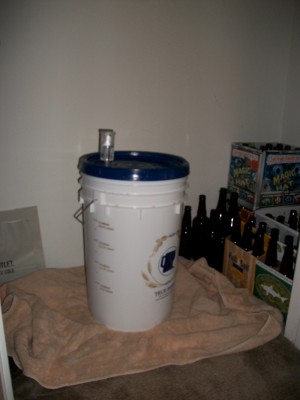 Fermenting is where the real action happens. It’s where the wort turns into beer. The best part is that you don’t have to do anything. The yeast does all of the hard work, transforming the wort that made on the stove into alcohol.

How Long Does Fermentation Last?

Fermentation varies depending on the recipe and ingredients, it generally takes about seven to 14 days. I know that it can seem like an eternity, but it’s worth the wait!

How Do I Know It’s Fermenting?

The first couple of times that I had a home brew fermenting, I spent most of the time worrying that it wasn’t fermenting. However, there’s usually no need to worry.

The signs that it’s fermenting is that there will be bubbling going on in the airlock. The bubbling is carbon dioxide being released by the yeast, a side product of making alcohol and one of the most fascinating things to watching during the fermentation periods.

How Do I Know It’s Finished Fermenting?

The most obvious sign that the fermenting is done, is that the bubbling stops, however, the yeast might not be done working completely yet. They may still be doing their job, but not producing enough carbon dioxide to make the bubbles very often or at all.

The surefire way to know that it’s done is to take a gravity reading with your hydrometer. Many recipes will include a final gravity and you want the reading you take to be somewhat close to that before you even start thinking about bottling your beer.

When the bubbling has stopped and your final gravity reading is in range, it’s time for the fun part and I’ll talk about bottling your beer in the next post.