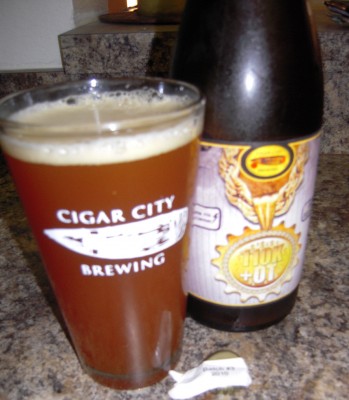 Most of the brewers that I’ve come across brew the same style anniversary beer year after year, with only a few minor tweaks and improvements. Cigar City Brewing from Tampa, plays a different game. The 110K+OT Batch #4 that came out in April of this year was an Imperial Red Ale, and Batch #3 that came out in 2010 was a Double IPA.

I suppose I should be reviewing the 2011 version, but when I spotted a couple of bottles of Batch #3 left at my favorite beer store, I couldn’t stop myself from picking one up and reviewing it here.

It poured a dark orange, almost brown color with just a light head.

In the smell department, I picked up the distinctive pine flavor that goes with an IPA, as well as a malty, chocolate aroma.

In the taste department, it was really heavy on the malt, with pine and citrus around the edges. It’s a big beer with 10% alcohol, but I picked up on the alcohol taste just a little bit at the tale end of the sip.

As far as the 110 IBU, I didn’t think it was that bitter. Maybe it mellowed out since it was brewed in 2010, but I still liked it.

Overall, 110K+OT Batch #3 was another solid beer from Cigar City Brewing, earning a 3.75 on the Passion For The Pint scale. I didn’t mind at all drinking the whole bottle by myself and I can’t wait to try Batch #4.