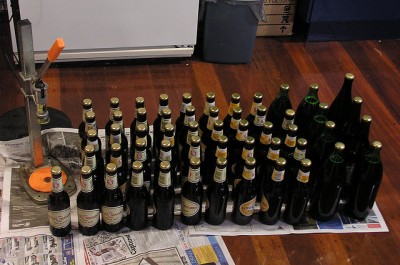 Woohoo, we’re on to bottling day equipment. We’re so close to being done that I can almost taste the home brewed beer!

In addition to the bottling bucket, racking cane and tubing; there’s a couple of other pieces of equipment that we’ll need to finish up the job. We’ll need bottle caps and something to of course attach those caps to the bottle.

For the most part, all bottle caps are the same. You can usually pick them up at the local home brew store for less than $5 bucks for 144 bottle caps.

If you’re brewing a low gravity beer or one that you’re going to age for a year or more, you can buy Oxygen Absorbing Caps for about the same price to protect your beer against oxidation and its stalling effects.

What Kind Of Capper Do I Need?

There’s two kinds of bottle cappers, the hand capper and the bench capper. They both get the job done, but there are some differences.

The hand capper looks like it has wings with a magnet where you place the cap and the bottle in between. It’s pretty easy to use once you get the hang of it and the cheaper of the two options. They generally cost less than $20.

The bench bottle cappers kinda (and emphasis on the kinda) look like an upright vise. You put the bottle and cap on the table and you stomp the cap on. It’s probably easier to use and I’ve been told by people who know more about the physics of home brewing that it creates a better seal. Bench cappers are a little bit more expensive, generally in the $30 to $40 range, but if you think you’re going to be doing a lot of home brewing and bottling a lot of beer, it’s probably a worthwhile investment.