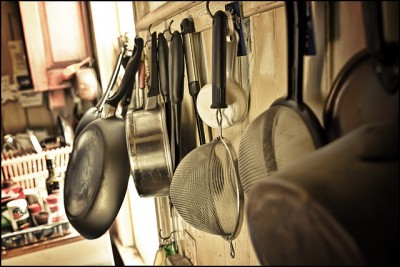 Most of the equipment you’ll need for making beer, you can pick up at a local homebrew store. You can buy a kit, or you can buy the pieces individually. However, there’s a number of items that they don’t tell you about when you’re at the store or reading about homebrewing in some book. It’s not that they do it on purpose. They probably just assume you have all of the equipment sitting around in your kitchen.

I know from experience that just because it’s not included in the starter kit or not sold at the brew shop, doesn’t mean that you won’t need it. Try telling the temperature of your wort without a thermometer or crush grains without a rolling pin. It isn’t that easy!

Unless you’re like me, you may have all of these pieces of equipment already. But too be on the safe side, I’m going to go over them now so it doesn’t come to your first brew day and you realize you don’t have everything that you need.

Kitchen Timer – When you’re boiling your wort, you’re going to have to pay pretty close attention to the time. You’ll have to brew certain things for specific periods of time, add certain ingredients at specific times, so make sure you have a good timer. If you have a smart phone, there’s lots of kitchen timer apps and even a few designed specifically for homebrewing.

Rolling Pin – If you’re using crushed grains with your extract brewing and you buy them uncrushed (so they stay fresher), you’re going to need to crush them with a rolling pin. If you don’t have a rolling pin, a large beer or wine bottle will do the trick. If you’re all grain brewing, you’re probably going to want a true grain crusher. But that’s a whole other story.

Strainer – Eventually, you’ll probably get a strainer designed specifically for homebrewing. Trust me, it just kind of happens one day. But to start off with you can use the one you already have if you’re lucky enough to have one sitting around in a cabinet. You’ll need it to strain out the hops and other ingredients as you pour your wort from your brew pot to your fermenter.

Spoon – You’ll need a good spoon to stir your wort, aerate it and for all sorts of other fun things. A good, handy spoon should be around 18-24 inches long.

Thermometer – You’ll need to know the temperature of your future beer in a couple different stages of brewing, so a good thermometer is a must if you want to avoid some off flavors. I recommend a digital one that can go from at least 60 degrees F to 220 degrees F. If you already have one, it doesn’t hurt to get one specifically for your brewing adventures.

Any other kitchen items that you use as part of your homebrewing equipment?