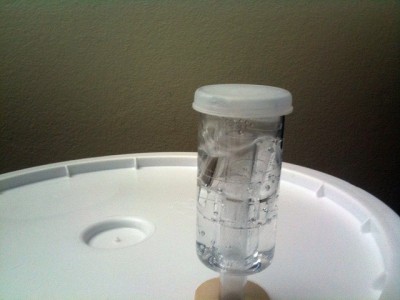 I’ve seen the questions dozens of times, beginner homebrewers (including myself in the early stages of my homebrewing career) asking:

Is their something wrong, the bubbling hasn’t started in the airlock?

Did I ruin my beer? There’s no bubbling in the airlock! Help!

Can I bottle my beer? The bubbling has stopped in the airlock.

Maybe, but probably not.

Maybe, but probably not.

Visible signs of fermentation can take up to 72 hours to appear, so just because the bubbling hasn’t started yet, doesn’t mean that there is something wrong with your beer. Give it a little bit more time before you start getting worried. I know, I was in your shoes too. It’s easier said than done, but be patient and more than likely you’ll be rewarded.

If those 72 hours have come and gone, you still don’t need to freak out. The bubbling in the airlock is just one sign of fermentation. It’s not the only sign. Just because there’s no bubbling, doesn’t mean that the yeast aren’t turning your wort into beer. The cause could be that your bottling bucked might not be completely sealed, so the gasses are escaping in other places then through your airlock. Not the end of the world, but press down on the edges of the lid and make sure it’s completely sealed.

And just because the bubbling has stopped, doesn’t mean that it’s time to bottle your beer. The yeast might still be working, but not enough to produce enough gasses to cause bubbling in your airlock. If you bottle your beer while the yeast is still working, it can result in over carbonated beers or the always scary bottle bombs.

If you really want to know if fermentation is happening or if it’s time to bottle beer, you’ll need to use a hydrometer reading and take a gravity reading. Take readings on consecutive days and if there’s changes, the yeast are working.