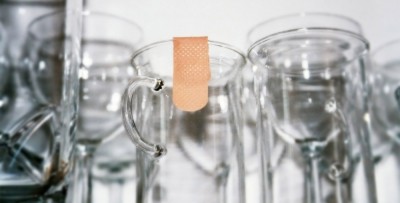 Even if you avoided making any mistakes, sometimes there’s still problems in the finished product. I’ve had beers that didn’t carbonate, poured a bottle of beer into a pint glass and saw mold and lots of other random, but not fun problems. Some of the issues I could’ve prevented, others not so much. Either way, here’s a few solutions for the most common homebreiwng problems that I’ve come across.

Beer Has No Carbonation
As I mentioned above, I know all too well about this problem. If you open a homebrew and it’s flat, give the others more time to carbonate. It can take two to three weeks for a beer to carbonate, sometimes longer depending on the amount of alcohol in it and the temperature of it. If that doesn’t work, you can try adding carbonation pills (you can find them at a homebrew store) and recap them. If that still doesn’t work, you may need to add fresh yeast.

Mold In My Bottles
This is another problem that I’ve unfortunately encountered first hand. It’s really simple to avoid (make sure you clean out your bottles ahead of time and make sure they’re still clean on bottling day), however once you have mold in your beer, there’s not much you can do about it.

Airlock Not Bubbling
An airlock with lots of bubbling action is a good sign of fermentation, so when you don’t see it, it can make you nervous. If you don’t see any bubbles, it could mean that your bucket lid isn’t on tight. While it’s not an optimal condition, it’s okay because the yeast could still be fermenting inside the bucket. The best way to see if your yeast is fermenting is to use a hydrometer to check the gravity and see if it’s decreasing.

Yeast Not Working
So you checked the gravity, it’s not changing and there’s no visible signs of fermentation? That could mean that you got a bad pack of yeast. However, first I would give it more time and see if the yeast springs to life. If the yeast doesn’t start working, you may need to go out and get another pack of yeast. Make sure this one is fresh and create a starter kit if it’s needed.

Exploding Bottles
Exploding bottles aren’t just messy, but they can also be dangerous. If you have one bottle explode, be prepared for others to explode. Carefully move the bottles to someplace safe where they won’t create a mess or put them someplace cold enough to make the yeast go dormant. The main cause of exploding bottles that I’ve seen is bottling your beer too soon or using too much sugar, so make sure you’re yeast is done working using gravity readings and that you follow the recipe for the suggested amount of sugar.

Beer Tastes/Smells Sour/Funky
Intentionally a sour or funky beer can be an awesome thing. Unintentionally, it can lead to the worse case scenario and you having to pour your beer down the drain. This is another one of those problems that can’t be fixed once it’s happened, however the best way to prevent it in the future is to make sure you’re thoroughly cleaning and sanitizing everything every step of the way.