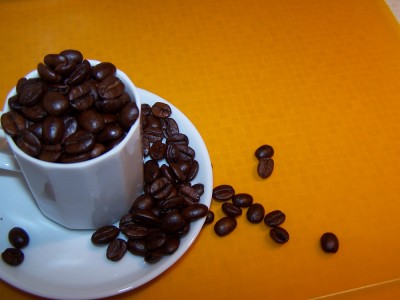 I don’t think it’s a secret that I love coffee, just as much as I love beer, so it’s only natural that I want combine my two favorite beverages when I homebrew.

I couldn’t wait to add coffee a beer that I was making, in fact the second beer that I homebrewed had coffee in it. However, when it came to add coffee to my homebrew, I wasn’t exactly sure how to do it or when to add it. There was a lot of information online about how and when, but it was often conflicting and usually confusing.

I decided to try a few different methods in sort of a quest to find the perfect way to add coffee.

What I found was that cold brewed coffee created the taste and flavor. It was smooth and still had lots of coffee flavor that mixed well with the stouts I was brewing. I used a Toddy to cold brew my coffee, instead of brewing it with a coffee maker. I found that hot brewed coffee resulted in a bitter coffee flavor in the end result.

I use about a cup of cold brewed coffee per five gallons of beer. It may not seem like a lot, but cold brew coffee is concentrated and it’s enough to give a coffee flavor to the whole beer without over powering the other flavors.

I discovered that adding the cold brewed coffee into the secondary or bottling bucket, resulted in a distinctive coffee taste but not too strong.

As with all homebrewing, I’m careful to make sure that everything is clean and sanitized. I make sure to sanitize the Toddy with my Starsan. However, the coffee itself I leave unsanitized. I know some people like to boil it or treat it in vodka, but those both add off flavors that I don’t want in my beer. I think that by waiting to add the beer to the secondary or the bottling bucket, the alcohol is strong enough to protect the beer from anything dangerous that might be lurking in the coffee.

On my list of things to try is adding ground coffee in a muslin bag added directly to the secondary. I will try it and report back on how it goes.

It never hurts to keep experimenting to see what tastes the best to you. And remember the better the coffee, the better the flavor, so don’t use that Foldgers or Maxwell House that’s been sitting in your kitchen cabinet for ages.

7 Replies to “How To Use Coffee In Your Next Homebrew”