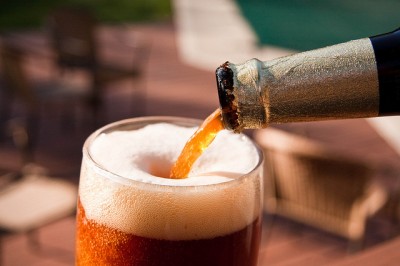 I’ve been pouring beer for more years than I can count, however during most of those years I didn’t care about how I poured it or even if I was pouring it correctly. The result was a lot of badly poured beers and even some alcohol abuse with beer overflowing out of my glass (or sometimes red plastic cup).

Now that I’m drinking better beers (AKA craft beers) and making my own beer a lot of the time, I want to be able to taste my beer, without it foaming all over the place.

The Best Way To Pour A Beer

First, you’re going to need a clean glass! You don’t want any dirt or leftover beer interfering with the taste of your beer. Watch out for any oils or soaps that could destroy the head of your beer.

Use a room temperature glass for optimal taste and flavor. I always thought that a frozen glass would be better, but it turns out that could actually inhibit the taste.

Hold the glass at a 45 degree angle and pour the beer in, aiming for the side of the glass.

At the halfway point, bring the glass to a 90 degree angle and pour the remaining beer in the middle of the glass.

Don’t be afraid of pouring it to hard, depending on the beer, a good head is around an inch thick.

If the beer has yeast in it (because it was bottle conditioned), don’t pour it all in. Leave a quarter of an inch (or so) of beer behind at the bottom.

Depending on the style of beer, the method can change a little, but that should get you through most beers. You can learn more about pouring various styles of beers over at RealBeer.com.

Photo by Another Pint Please.

Tags: Beer, How To