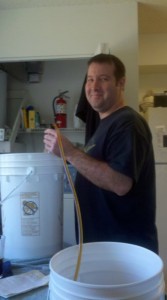 My name is Mike Crimmins. Usually, I blog about coffee. However, I’ve been getting to know some really good craft beers and really getting into home brewing. I couldn’t resist starting this little side project called Passion For The Pint.

When I’m not blogging about coffee or beer, you can find me exploring Tampa’s wide range of eateries, rooting for the New York Yankees (don’t hate me, I’m originally from New York) or reading about beer or coffee.

Until recently, my beer history wasn’t something to write home about.

I had my first sip of beer on a football Sunday when I was about six or seven years old. I snuck in a sip of my dad’s Coors when he left the room for a few minutes. I didn’t really understand why adults liked this beer thing.

It wasn’t until my awesome girlfriend bought me the Naked Pint that I really started getting into craft beers and understanding that Bud Light and Coors were the beer equivalents of Folgers and Maxwell House. After a few trips to some stores that carried craft beers, that I started to learn that like coffee, there were all types of premium beers. And like coffee, beers could have all sorts of aromas and tastes. I haven’t stopped trying beers since then and I’m now in the process of brewing my own beer.

Why Did I Start Another Beer Blog?

There’s dozens of great beer blogs out there, but I felt that I had to share what I was seeing and discovering. I started Passion For The Pint to be some sort of journal for all of the craft beers that I try and to document my home brewing adventures.

I hope you follow along on this journey. I think it’s going to be fun.

2 Replies to “About Me, My Beer History And Why Did I Start Another Beer Blog”